You are here: Home / Feature / The Family Tree of Steve Jobs 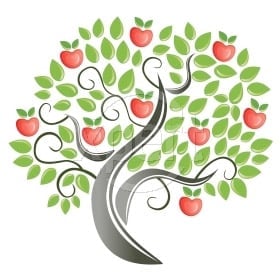 When a person with as big an impact on the world as Steve Jobs dies, you can’t help wondering about the legacy he left behind. Obituaries always tell you that the deceased is “survived by” his or her loved ones. So just who are the people Steve Jobs left behind? Steven Paul Jobs was born February 24, 1955 to Joanne Carol Schieble, an unwed mother who gave him up for adoption, being unable to care for him alone. His biological father was Abdul Fattah Jandali, a Syrian national who was in America to attend college. It was during this time that the two met, and wanted to get married, but Schieble’s conservative father would not allow it.

Paul and Clara Jobs, Steve’s adopted parents, are both deceased. Paul Jobs, a Coast Guard veteran, worked as a machinist for a company that manufactured lasers, and is largely responsible for his son’s interest in electronics and working with his hands. Clara Jobs was an accountant. She died in 1986, and Paul seven years later, in 1993. Today, Abdul Fattah Jandali is Vice President and General Manager of the Boomtown Casino and Hotel in Reno, Nevada, where he uses the American first name “John.” Prior to working in Reno, he served as a political science professor at the University of Nevada. It’s interesting to note that Jobs’ biological father is a successful businessman; certainly nothing on Jobs’ billionaire level, but perhaps some of his business smarts were passed on by Jandali, who only found out that his biological son was Steve Jobs in 2005. The 80-year-old Jandali, who has been married at least three times, is even on Facebook.

Jobs’ mother Joanne Schieble Simpson, now 79, has kept a much lower profile. All that’s known about her personally is that she works as a speech pathologist. Jandali and Joanne Schieble actually got back together a year after Jobs’ birth, and eventually married, giving birth to a second child, daughter Mona, though they later divorced. Joanne remarried years later to an American named George Simpson, whose last name she took. Mona Simpson is a novelist, essayist, and Professor of English at UCLA. She has published five novels: Anywhere But Here, The Lost Father, A Regular Guy, Off Keck Road, and My Hollywood. In a fascinating mirror of real life, all of Simpson’s novels take readers deep into the world of dysfunctional families. The Lost Father is said to be based on her own attempts to find her father, John Jandali, while A Regular Guy is believed to be loosely based on Steve Jobs and his relationship with daughter Lisa Brennan-Jobs (see below). Both Mona and her brother Steve are (were) to this day estranged from their biological father John Jandali. In early adulthood, Steve Jobs was still dating his childhood sweetheart, painter Chris Anne Brennan. Brennan gave birth to Lisa Brennan in 1978, but Jobs famously denied paternity, even swearing in court that he couldn’t be her father because he was sterile. But a court-ordered DNA test determined that he was indeed Lisa’s father, and the two later forged a strong relationship in her teens, when she moved to California and lived with Steve and his wife for a time. It’s rumored that the Apple “Lisa” computer was even named for her, having been released the same year that she was born, though Apple has denied this. Later, Jobs would tell biographer Walter Isaacson “Obviously, it was named for my daughter” however. Today, Lisa Brennan-Jobs (Facebook Page) is the second familial relation to Steve Jobs to have a literary proclivity. Lisa is an accomplished journalist, regularly being published in Vogue, O The Oprah Magazine, The Harvard Advocate, The Southwest Review, The Massachusetts Review, and more. It’s unknown what level of contact she has with other members of the Jobs family, but at least one member of her biological family tree has reached out to her — publicly. Take a look at this Facebook wall post from John Jandali, Jobs’ biological father, written directly to Lisa on July 30th of this year. The relationship between Lisa and her famous father was documented in the book The Bite in the Apple, which was written by her mother in 2012.

Steve had one adoptive sister named Patti Jobs, who is three years his junior. She was married in 1975 and is believed to have taken her husband’s name, which is unknown. Her whereabouts or current status are things she has chosen to keep private. In March of 1991, Steve Jobs married Laurene Powell Jobs, who remained his wife until his recent death. Laurene is a successful businesswoman in her own right, having co-founded natural foods company Terravera, and previously served on the board of directors of Achieva, creators of online tools for student test-taking. Currently, she is on the board of directors for a number of non-profit organizations, including Teach for America, Global Fund for Women, KQED, EdVoice, New America Foundation, Stanford Schools Corporation, and New Schools Venture Fund. She is on the advisory board for the Stanford Graduate School of Business. In 2010, President Obama appointed Laurene as a member of the White House Council for Community Solutions, which advises the President on matters of education and job creation. She also controls the Laurene Powell Jobs Trust (formerly known as the Steven P. Jobs Trust), which is said to hold around 130-140 million shares of a variety of companies, including a 7.3% stake in The Walt Disney Company, making the trust the largest shareholder of that corporation. Steve and Laurene have three children. 23-year-old Reed Paul Jobs, and his two sisters Erin Sienna Jobs, age 19, and Eve Jobs, age 16. Since their father’s passing, the Jobs children have tried to lead a low-key lifestyle well out of the limelight. Reed attended Stanford where he majored in history and biology. Erin entered college this past fall, while Eve remains in high school. Based on their lineage, it seems that whatever the Jobs children apply themselves to in the future, they can look forward to great success.