You are here: Home / Feature / The Engineering Needed For Apple’s New Spaceship Campus 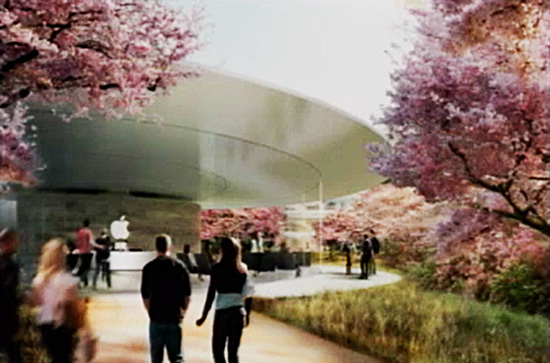 Approved by the Cupertino City Council on October 15th, Apple’s new “Spaceship Campus” is officially on its way. CEO Tim Cook has hailed it as “our home for innovation and creativity for years to come,” and in addition to being a stunning architectural achievement, it will no doubt be the breeding ground of many exciting new technologies.

Images of the new facility have been circulating and generating buzz on the internet for months, and it seems clear that the new campus will represent a significant step in the history of Apple. Though Steve Jobs is no longer at the iconic company’s helm, his legacy and influence will be firmly ingrained in the futuristic facility he played a key role in conceiving and developing. So, as Apple moves into the future, pushing the boundaries of innovation, they are committed to remembering and celebrating their roots.

Crafting and Engineering the Future

As the project’s lead architect, Sir Norman Foster of Foster & Partners, recently remembered that Jobs told him “don’t think of me as your client; think of me as one of your team”. Clearly, he wanted the design to be a reflection of his legacy and a launching pad for Apple’s future evolutions and though ground is yet to be broken on the construction site, we can expect to see Job’s vision become a reality by 2016.

The striking campus will feature a 1000-seat auditorium spanning about 120,000 sq. feet. Its entrance will consist of a large silver circular disk, resembling a flying saucer, which will be supported by high glass walls to appear as though the “spaceship” is floating in a shallow valley amongst trees. Circular elevators and impressive staircases will lead into the underground facility, where the amphitheater (along with a kitchen, back stage, loading dock, lobby, and multiple storage spaces) will be submerged into the landscape.

But the theatre is just one small part of the vast facility, which will sprawl over 2.8 million sq. ft. Apple is expected to hire more than 9,200 construction workers to complete the monumental construction project, and has plans to hire an additional 7000 new employees to staff the campus, which will employ more than 14000 full time workers in total. It is also estimated that the campus will indirectly support a further 41,000 jobs throughout the country. The total budget including property purchases and all construction is expected to be somewhere in the area of an astonishing for $3-5 billion, while Apple has announced they will be spending $66 million solely to develop community infrastructure and fund public improvement projects in the surrounding area.

So, what type of engineering job and construction skills are exactly needed for such a development and the features as mentioned above? Well, the above will need specialist workers such as structural engineers who are experienced in analyzing the design and planning for structural components around systems in place. They will ensure the safety of the structure before implementing any further construction. This will include making sure that those circular elevators and impressive staircases will lead safely into the underground facility that is proposed.

The bulk of the facility will actually consist of a four-story donut shaped structure, set into the tree-filled landscape, with a large forested courtyard in its center. Now because the entire façade will be circular, Jobs claimed there wouldnít be a single piece of flat glass used in the impressive exterior, which will include some of the largest panes of glass in the world. Complete with a café, extensive office space, R&D facilities, a fitness center, parking garages, an energy production center, and even an apricot orchard; the campus will mark a major architectural innovation in the history of office design. The role of an architect who is connecting these elements together needs to be spot on, meaning the worker will need to have technical, academic and practical experience.

The roof will be covered in solar panels, and the campus will feature a number of roadways, walkways, footpaths, and bike paths. There are even plans to build an artificial lake in the interior of the circular main building meaning a construction manager will need to take the lead role to on a very large and complex development and may have to hire specialist contractors or consultants to facilitate the development.

This project, which has the ambitious goal of completion within just three years is employing landscapers, architects and a wide range of construction teams, renewable energy firms, IT experts, inspectors of many types and outside consultants as detailed.

One of the more innovative aspects of the design that captures my attention is the airflow control systems that automatically open and close windows. The high-tech facility will also have special solar tubes to pipe natural light throughout the interior which is a big smiling point for me as I like being eco-friendly.

Officially known as the Apple Campus 2, the new facility will be built over the existing headquarters at its renowned address of 1 Infinite Loop. Of course, the campus will now truly become one infinite loop, and it will do so in stunning fashion. As construction teams prepare to start on the exciting new project, the international architectural and technological communities are eagerly awaiting the day when the Apple Campus opens its awe-inspiring doors.

Jenny Ann Beswick is a graduate of engineering and has a passion for technology and innovation. She has worked in scientific and engineering fields of work and on an international level. Jenny loves how the future is developing and being project managed into a new dimension. You can follow her on Twitter.