You are here: Home / Feature / Introducing: This Week on Kickstarter 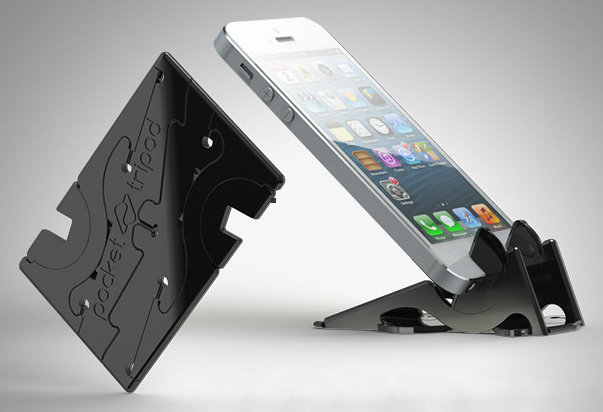 Welcome to the inaugural edition of a new weekly column that we’re calling “This Week on Kickstarter”! Each week, we’ll take a look at the latest Apple-friendly gadgets on Kickstarter and highlight the ones we think are most worthy of your support. Think of it as a Cliff’s Notes for Apple-y Kickstarter projects.

For each listing, we’ve included a brief explanation of what the product is, a direct link to its Kickstarter page, and a link to its official website, along with Kickstarter’s widget that shows the project’s current status.

You’ll also notice a green bar that says “Minimum Pledge.” This is not the smallest pledge amount available; it’s the smallest amount you must pledge to actually acquire (or purchase) at least one of the item. That seemed like useful information to us, so we’re saving you the trouble of having to hunt it down on Kickstarter.com. And it’s worth keeping in mind that many of these prices are pre-order specials, and don’t reflect the (higher) final retail price the product will be offered at once it’s launched.

Before we get started, the fine print: Choosing to pledge financial support to any Kickstarter project always carries risks. Apple Gazette will not be held responsible for any failures on the part of a project’s creator(s). These are the projects we think stand the best chance of succeeding, and that look the most interesting and useful. These listings do not represent paid endorsements, and are selected at the sole discretion of the staff of Apple Gazette.

Now that that’s out of the way, let’s begin! 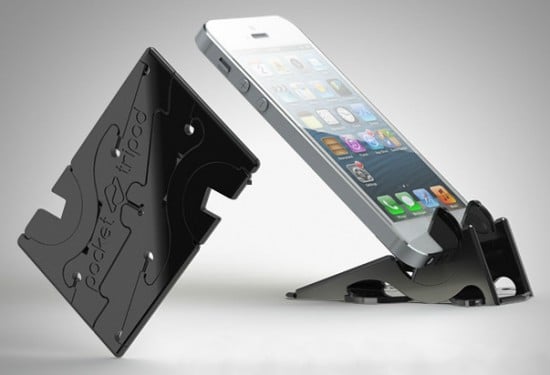 An ingenious iPhone tripod that folds down to the size of a credit card, but can accommodate any angle of articulation. The way it works is very impressive, and get this: they even made an app that gives you a 3D digital model of the Tripod so you can play with it and see how it works. It’s a free app you can download here. A precise, snug fit around your iPhone is required to make the Pocket Tripod work, so models are in the works for both iPhone 5 and iPhone 4/4S. 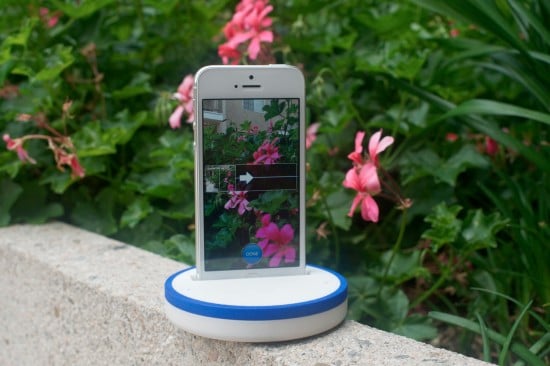 A clever iPhone dock that can spin in place. Its rotation feature is made to simplify panorama shots, but it’s also a great tool for time-lapse photography. The Spinpod is a lot smarter than you might first think; you can adjust the vertical angle of your phone, and a nifty touchpad feature on the top surface lets you swipe in the direction you want it to spin. There’s an optional accessory available that lets you mount your phone horizontally. 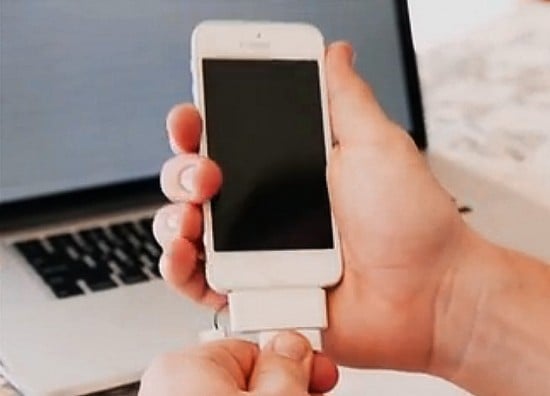 Think of it as the missing adapter for your iPhone 5. Put simply, it’s a tiny add-on that lets you charge your iPhone 5 using the 30-pin connector from older iPhones. It works with micro USB cords (used for many Android phones) as well, and is small enough to fit on a keychain.

Combine a flexible, rubber case for your iPhone 5 with a induction base charger that will juice-up your smartphone without the need for cords or other desk clutter. Despite its potentially unreachable goal ($100,000), it does look impressive. Especially the rubber iPhone 5 case, which has embedded all of the circuits and wires needed to charge your phone. And it’s a remarkably slim case, to boot. 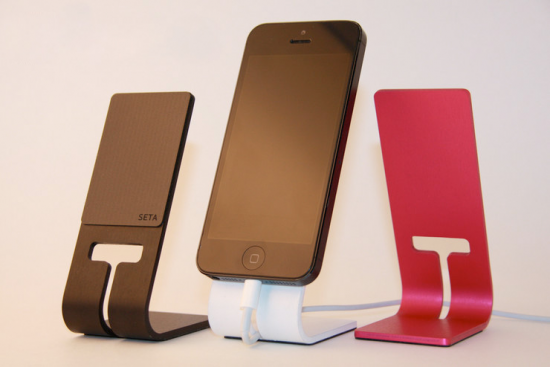 Nope, it’s not magnetic. But that iPhone 5 really is sticking to this clever little stand as if it were. How do they do it? Through a patent-pending new technology called “NanoSuction,” which is like millions of microscopic suction cups. These “SETA pad” strips stick to almost anything without the need for adhesives or magnets, and cause zero long-term damage to your phone. Nifty. Plus, you get this cool metal stand with a “T-channel” that accommodates both Lightning and 30-pin power cords. They even throw in an extra SETA pad so you can adhere other devices (like your iPad) to virtually any hard surface in your home.

Author Bob Luther believes he may have stumbled upon ownership of the very first Apple I computer ever sold. After acquiring the computer via a self-storage auction, he set out on an exhaustive quest to interview friends of Steve Jobs and Steve Wozniak, to prove or disprove his theory about his Apple I’s significance. His book The First Apple is Luther’s account of this fascinating story. 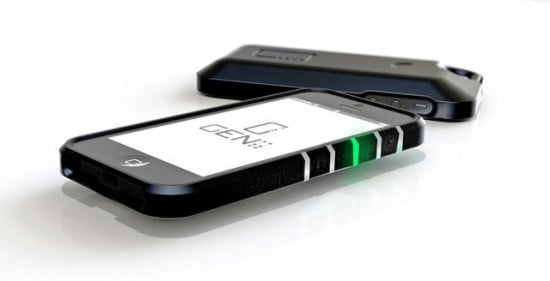 A hard case for your iPhone 5 that comes with two unique functions: five LED lights, each a different color, line the right side. They serve as visual cues, lighting up when you have new email, social notifications, missed calls, and more. The second function is a set of physical buttons for controlling music playback. Like many Kickstarter inventions, the Genii was dreamed up as a solution to problems experienced by its inventor.