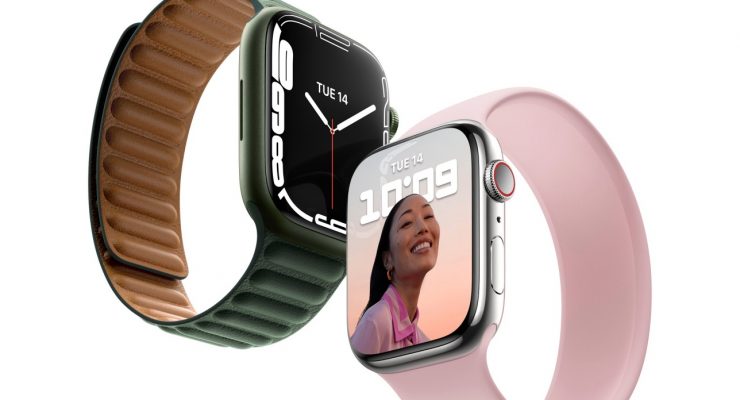 What’s new with the Apple Watch 7?

At a quick glance, the obvious difference between the new Apple Watch 7 and its predecessor, the Apple Watch 6, is its screen area. Aside from having a bigger screen area, the new model has thinner borders, which make this display the biggest one yet. The dimensions of the watch itself are almost the same, but there’s significantly more screen area. Plus, the design looks rounder with softer corners. The screen is also engineered to have this unique refractive edge, which makes everything look seamless.

Does the Apple Watch 7 have better battery life?

How much bigger is the Apple Watch 7?

The Apple Watch 7 is available in two screen sizes: 41mm and 45mm. These are slightly larger than the Apple Watch 6, which had 40mm and 44mm. However, this subtle change actually makes a huge difference when it comes to the display size thanks to the thinner bezels of 1.7mm.

The new Apple Watch 7 provides almost 20 percent more screen area than its predecessor. In addition, this newer version’s Always-On Retina display is also 70 percent brighter indoors compared to its predecessors. This allows for easier viewing of the watch face without necessarily lifting the wrist.

How do you type in Apple Watch 7?

Because of the bigger screen display, Apple took advantage of this feature and added a new QWERTY keyboard in the mix. You can type on this keyboard on your Apple Watch 7 or swipe using QuickPath. In addition, this newer version also features two additional bigger font sizes. When using the QWERTY keyboard, you might be delighted to know that it uses on-device machine learning to figure out the next word to be typed. This enables users to have an easier and faster time typing on their Apple Watch 7.

Yes, it is. The new Apple Watch 7 is made with a stronger front crystal compared to the Apple Watch 6. It has a more robust geometry and is also thicker than the ones used in the Apple Watch 6 by up to 50 percent. This makes the front crystal resistant to cracks but without foregoing optical clarity. Plus, the new Apple Watch 7 is also certified IP6X dust-resistant, so you can bring it to sandy places like the beach without worries. This watch also has a water resistance rating of WR50 so you can use it while swimming as well.

Does the Apple Watch 7 use the same bands?

Yes, the Apple Watch 7 is compatible with previously launched Apple Watch bands. The new collection comes with five new aluminum case colors, which are green, starlight, midnight, a new blue, and (PRODUCT)RED. Along with this collection, there will also be new color bands to be released that are compatible with other Apple Watch models as well.

When will the Apple Watch 7 be available?

Because of the new features and the drastic physical update to the Apple Watch 7, it has everyone excited. The new collection will be released “later this fall,” as stated by Apple. This timeframe is a bit vague but you can expect the launch to happen before November ends this year. Before this model goes on sale, there will likely be a pre-order period, just like with the new iPhone 13.

How much will the Apple Watch 7 cost?

What health and wellness tools does the Apple Watch 7 feature?

Is the Apple Watch 7 environmentally friendly?

If you’re also concerned about the environment, you’d be glad to know that the new Apple Watch 7 has more recycled materials compared to all the previous versions of the Apple Watch. All of its magnets, including in the Taptic Engine, use 100 percent rare earth elements. Almost all the tungsten content in the watch is also 100 percent recycled. Plus, the case on aluminum models is also 100 percent recycled. No harmful chemicals like mercury, beryllium, PVC, and BFRs were also used in making the Apple Watch 7.

This is a tricky question. On one hand, the Apple Watch 7 arguably looks so much better than the Apple Watch 6. With faster charging, a bigger screen display, higher durability, and more health and wellness tools, you can say that the Apple Watch 7 is the way to go. It even features a new QWERTY keyboard to make things easier for its users.

On the other hand, one can argue that the changes do not exactly merit a new purchase. For a basic Apple Watch, the purpose remains the same for both models. If all you need is functionality, the Apple Watch 6 might already be enough for you. One can argue that it all comes down to your personal style and usage. If the Apple Watch 6 is serving you well right now and you feel that it’s working enough for you, purchasing the new Apple Watch 7 may not be sensible. However, if you need a larger screen display or you find yourself charging your current Apple Watch way too long or too often, an upgrade to the new Apple Watch 7 may be the right decision.