You are here: Home / Apple Watch / What to Expect From Apple’s “Spring Forward” Apple Watch Event 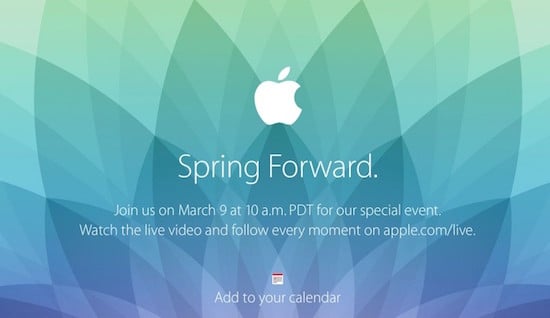 In just a few days time we’ll finally get a much better look at the Apple Watch. On Monday, Apple is holding a special event entitled “Spring Forward” during which the company will unveil it’s latest high-tech device. At this point it is safe to say that not just Apple fans are excited to see what they have in store, as the entire wearable industry will no doubt be watching with anticipation as the tech-giant makes its initial entry into the market. Apple’s smartwatch will either bring legitimacy to the wearable concept or provide ammunition for the pundits who continue to predict failure. Only time will tell for sure, but as many of us have learned over the years, it’s tough to bet against Apple when they set their minds on opening a new market.

Here’s some idea of what we can expect from the Spring Forward event.

There has been speculation for months on the pricing of the Apple Watch and is eventual release date. Both of those questions should be answered in some detail when Tim Cook and company take the stage on Monday. We already know that the price for the Sport version of the Watch will begin at $350, but just how much will the standard Watch and the high-end Watch Edition run? How much will the individual bands that give the Watch its unique look cost? We’re sure to find out next week, and there could be some big surprises on the upper-end of the price spectrum. In fact, the Watch Edition has the potential to be one of the most expensive products that Apple has ever delivered. We’ll know if that is true soon enough.

As for when the Watch will be released, a definitive date will definitely be given, along with the possible launch of preorders as well. Tim Cook has already said that the Watch would go on sale in April, so expect it to become available early in that month. He has also stated that it won’t be exclusively available in the U.S. at launch either, so European and Asian countries are likely to see the Watch arrive sooner, rather than later. Cook first took the wraps off the Apple Watch back in September when the iPhone 6 was first announced. At that time we got a brief glimpse of what the device was capable of, with some tantalizing peeks at what we could expect once we get one wrapped around our wrist. But much of what the Watch can do is still shrouded in mystery. Look for the veil to be fully lifted on Monday, as Apple strives to show us why their smartwatch is different and more functional than similar products from its competitors. Expect a feature or two that we haven’t seen yet to make an appearance during these demonstrations as well, as Apple has clearly not shown us everything it has up its sleeve just yet.

One of the big reasons that Apple revealed the Watch last fall was so that it could begin working with app developers prior to the launch of the device. Over the past few months those developers have been able to play with WatchKit – the SDK for the Apple Watch – extensively, and have no doubt come up with some very creative ways to use the device. Expect Apple to have several of those developers on hand to show off their creations. Just like with the iPhone, the app ecosystem will make or break the Watch, and Apple wants to give customers plenty of reasons to purchase this new device. The Apple Watch gets much of its unique functionality through a connection with an iPhone. In order to take advantage of this symbiotic relationship, those phones need to be upgraded to iOS 8.2, which should be set for release sometime next week as well. That version of the mobile operating system provides support for the Watch, delivers some important bug fixes and optimizations, and adds features to the Health app too. Since we know health and fitness are at the core of what the Apple Watch can do, those features will no doubt be linked to Apple’s new gadget on some way. While we aren’t likely to see a demo of iOS 8.2, expect a release date to be announced at the event.

During the Steve Jobs era at Apple it become common for Steve to close a keynote address with “one more thing.” These surprise announcements often heralded the arrival of a new product or service that customers usually didn’t see coming. Rumors have been persisting for weeks now that Apple will soon announce a brand-new Macbook Air with a 12″ Retina display. Some believe that that will come next week as well, although there are rumblings from Apple’s Asian supply chain that production on the new laptop won’t begin until the second quarter of the year. That is an awful long time out for Apple to announce a new Macbook, which means it probably won’t be shown off at this event. But then again, you never know what kind of surprises are in store for us.

The anticipation of a new product launch from Apple is always exciting. In just a few short days we’ll all know a lot more about the Watch, and just how it could change our lives. It is said that patience is a virtue, but it is going to be a very long weekend while we wait for Monday’s event.