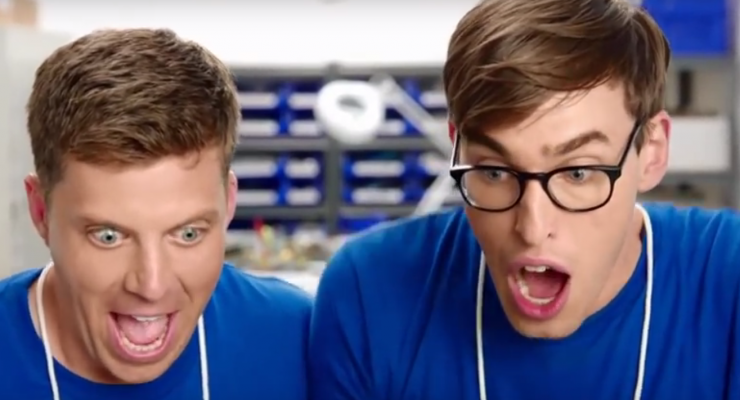 Whether you love them or hate them, the blue-shirt fellows at the Apple genius bar have to put up with a lot more horror stories than you would think. I mean these guys have it pretty bad some days. Ironically, every time I walk in to the Apple store, I either think “there are way too many of you guys” or “where the heck are all the geniuses?”. The horror stories that some of these guys have are pretty strange. Unfortunately, current Apple employees “are not allowed to talk to the press” and the one tale I was able to dig up is a bit dated. It came from a gal who is friends with a current employee that I met in a store.

An employee, we’ll call him John, was working in a store a few years ago when a customer came in with just the innards of his iPod. It was an early generation iPod and the screen and wheel were still attached to the motherboard but the entire case was missing. Apparently, the customer approached a table where John was situated and the exchange went as follows:

Customer: “My iPod is broken.”

John [who said at this point he was fighting back laughter]: “Do you have insurance on it?”

At this point the customer launched into a tirade of profanity that I can’t write on this site and didn’t leave until the manager threatened to “call the cops”. So much for civility. I asked John if he thought Apple Care is a scam and he replied “absolutely not. I get it on all my devices”.

If he is on a Mac the best bet is in an encrypted, password protected .dmg file which can easily be made with disk utility.”

I went through the normal troubleshooting flow. Plugged the machine in, orange LED on magsafe connector. Tried powering machine on with head close to keyboard to listen to any signs of life, nothing.

Next step is to bring machine in back to check and see if magsafe connector on main logic board came loose/liquid damage inside the machine. Opened the machine up and IMMEDIATELY started to dry heave. The machine was full of vomit. Left the genius room still dry heaving, washed hands, regained my composure and put on latex gloves. Buttoned the machine back up and brought the machine back out to the customer (I had been in back for 15 minutes or so at this point) and simply said “I’m sorry but we cannot perform a repair on this machine.” His response was “Why not?” I replied with “It’s considered beyond economical repair, and it is a biohazard.” (Trying to get him to realized that I KNOW the machine is full of vomit, cause he definitely does as well since he cleaned up the outside of the machine) “Why is it a biohazard?” At this point I was so fed up with this guy (typical frat-guy) that he would bring a machine filled with his vomit for someone else to touch that I responded “It’s filled with vomit, if you want a working computer find a specialist, they’ll sell you a new one” and proceeded to walk to the bathroom to scrub from finger to shoulder. shudder”

Here’s an older one from an AMA from a Genius Bar employee who was around a long time ago:

“One time a lady and her daughter came in, both of them had butterfly facepaint artwork from some local fair or something. The mother simply said her phone wasn’t working, then her daughter said “and tell him what you did”. She told me that her phone was frozen so she went to the support site and when she booked the appointment in the store it told her to sync her phone before coming in. So she promptly filled the sink with water and dunked it in, having no idea what the hell she was doing. That was maybe the funnies. I also helped a black hat hacker. I plugged his mac into the network we have in the store that connects to the diagnostics server. He immediately unplugged it and frantically looked at what was open on his computer. After a bit he sighed and said that he has a bunch of virtual machines on his mac running some really bad malware and it infects things immediately. Thankfully none were running at the time or I might not have a job today.”