You are here: Home / Accessories / How to Know When It’s Time to Replace an iPhone Cover 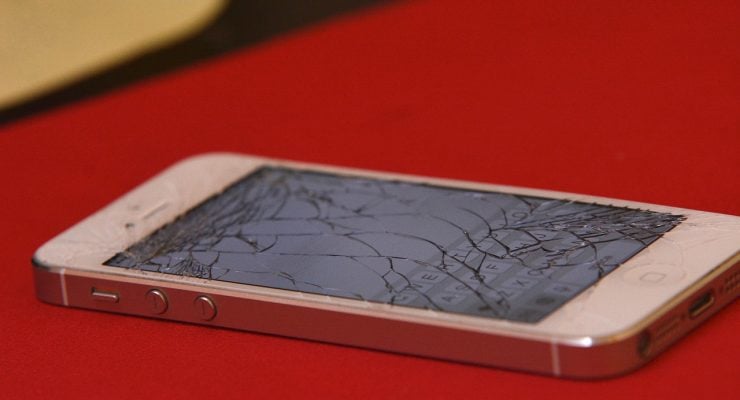 Apple’s iPhones revolutionized the smartphone industry. There’s no arguing that they’re a powerhouse, but that doesn’t mean that they’re invincible. We all dread it, but there comes a time when you pick up your iPhone and it just won’t work (or, let’s be honest, you drop it).

If your iPhone is damaged or not working, you’ve probably come here in a panic to ask “should I repair or replace my broken phone?!” Take a deep breath, we’ve got you covered. There are many factors that go into that decision and we’ve compiled them all here.

Read on to learn how to decide between repairing and replacing your iPhone. Reasons to Repair My Broken Phone

Apple covers all of its technology under AppleCare for the first year of the item’s life. Any issues that arise that are due to manufacturing defect will be covered by AppleCare. This is something that fans of Apple know all to well, as they’ve likely had to replace devices in the past, while also wondering if their item is within or outside of their initial AppleCare time period.

This means that if your phone stops working due to no fault of your own during the first year of ownership, you can take it to Apple and they’ll repair the damage or issue you a new phone. But if you drop your phone in a puddle and it still doesn’t work after praying to the “put it in a bag of rice” gods, then AppleCare won’t cover the cost of repair.

If you purchased AppleCare+, then you have an additional year of coverage and Apple will repair up to two incidents of accidental damage.

When your phone has minor damage, like a cracked screen, it is much more financially advantageous to repair your phone. Even the most expensive of Apple screen repairs is significantly less than the cost of replacing your phone outright.

For example, the screen repair on an Apple XS Max is $329 and the cost of that phone brand new is $1,099. That’s less than a third of the cost of a new phone. In many cases, you can go to a third-party repair shop to get a better deal. As reported by this useful site, there are many advantages to simply bringing in your iPhone to a retailer outside of Apple — not just to save money, but also to save time and frustration as well. When asked about how long a typical repair might take place, they went on to say “Most phone repairs take between 25-45 minutes while tablets and computers take 2-4 hours.”.

Your Phone is Brand New

If the damage to your broken iPhone is due to an accident and not a manufacturing defect, in most instances, it is still going to be less expensive to repair your phone rather than replace it.

This is especially true if you’re on a long-term payment plan for your phone through your wireless carrier. You will still be responsible for paying out the cost of the broken phone even if you choose to replace the phone.

Reasons to Replace My Broken Phone

If repairing your phone doesn’t feel like the right direction for you, check out these factors to determine if replacing your iPhone is the right thing to do. If you do decide to replace your iPhone, don’t forget to sell or recycle your old broken phone! You Don’t Have an Apple Store Nearby

If you live near a major city, Apple Stores seems pretty ubiquitous. There’s one at every high-end shopping center. The same cannot be said for people who live in rural areas. For people in those areas, the nearest Apple Store can be hours away.

If you don’t have an Apple Store nearby, then utilizing AppleCare is much more difficult. You have to mail in your phone and waiting for them to repair the phone and mail it back to you. For many people whose whole lives revolve around their phone (hello, daily alarm clock and calendar that keeps you on track), that’s simply not an option.

Choosing to replace a phone that’s covered under AppleCare is not necessarily the most financially advantageous thing to do, but if you can’t live without your phone for more than one day, you might trade it in and get a new one.

The Cost of Repair Rivals a New Phone

Some iPhone repairs are extremely expensive. This is particularly true in instances of water damage or multiple damaged components on the phone. Unless your phone is brand new, the cost to repair your phone may outweigh the actual value.

Keep in mind that, in most cases, the cost of repair will be less than the cost of a new phone unless you purchase an older model. But, if you have the funds for a new phone, and you’re faced with an immense repair bill, it’s worth the extra money to go ahead and get a replacement.

The Phone is Damaged Beyond Repair

This is an obvious one. If your iPhone is damaged so completely that you cannot repair it, then you have no other choice but to replace it.

It’s Time for an Upgrade

Some people are always looking for the latest and greatest technology. Others prefer to hold on to their iPhone until their dying days (or Apple stops supporting them). If you’re the latter, any choice other than repair might sound ridiculous but hear us out.

Technology is always advancing and changing. A phone that’s two or more years old is not going to be able to function as well as newer models even if you repair it. It’s worth the investment to replace old outdated phones to have a functional piece of technology. The longer you hold on to your old phone, the less trade-in value it’ll have when you absolutely have to replace it.

If you’ve got an old iPhone that’s broken, go ahead and spring for the replacement.

There are so many factors that go into whether you should repair or replace your phone. If you’re due for an upgrade (and have the cash available), it may be best to cut your losses. If your phone has a minor crack on the screen, then repair may be in your best interest.

Either way, it’s important to know that you have options available no matter which way you choose to proceed. In the end, there’s no real right or wrong answer to “should I repair my broken phone?” Go with the option that works best for you and know that you’ve invested in the best smartphone on the market!